The 2021 ISPS HANDA World Invitational presented by Modest! Golf is a tri-sanctioned event between the European Tour, LPGA Tour and Ladies European Tour (LET).  Two separate tournaments (Men & Women), compete on the same courses at the same time and for the same level of prize money, for the first time in the Northern Hemisphere.

The ISPS Handa World Invitational format is a 72-hole event. For the first two rounds, the players will go off in threesomes, with men's and women's groups separated but going off in alternating fashion in terms of tee times.  Read more 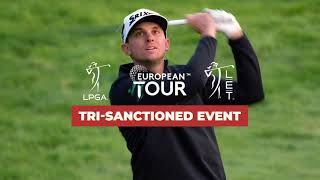