Cameron Tringale, in quest for his first win, leads by one ahead of Gary Woodland, Maverick McNealy

From The Daily Wrap-up, by AP:

Cameron Tringale made a short par putt on the treacherous par-5 18th hole at the 3M Open for a 5-under 66 and a one-stroke lead Saturday over Gary Woodland and Maverick McNealy.

Tringale, who tied for third last year at the TPC Twin Cities, eagled the par-5 12th and had three birdies in a bogey-free round. Winless on the PGA TOUR, the 33-year-old topped the crowded leaderboard at 12-under 201.

Woodland overcame a double bogey on No. 1 with birdies on five of his next six holes in a 67. McNealy had a bogey-free 68.  Read more

From The West Australian by AAP:

Cameron Tringale has sunk a short par putt on the treacherous par-5 18th hole at TPC Twin Cities to hold a one-shot lead heading into the final round of the PGA Tour's 3M Open.

Tringale's 5-under 66 tied was tied for the second-lowest round on Saturday and he sits at 12-under 201.

Gary Woodland (67) and Maverick McNealy (68) are a shot back in a tie for second while another 25 golfers are within five shots of the lead.  Read more

From Golf Canada, by AP:

The third round of the 3M Open was filled with shots into the rough and the water around the 18th green, and sometimes both.

Cameron Tringale stayed out of trouble that so many others didn’t Saturday – and took the lead into the final round.

Tringale made a short par putt on the treacherous par-5 18th hole for a 5-under 66 and a one-stroke advantage over Gary Woodland and Maverick McNealy.  Read more

A weather front passed through sweltering TPC Twin Cities on Saturday, lowering the dewpoint, dialing up a gusting northerly wind and jamming the 3M Open leaderboard with contenders galore.

By evening's light, 20 players — including four past major champions — were within four strokes of third-round leader Cameron Tringale, who tied for third last summer in Blaine.  Read more

Cameron Tringale fired a five-under par 66 to take a one shot lead at the 3M Open, where an onerous par-five 18th hole provided extreme moments of grief and frustration for the PGA field Saturday.

Tringale sank a short putt for par on 18 to move into first place on the leaderboard at 12-under 201 and grab a slim lead over fellow Americans Gary Woodland and Maverick McNealy.

The 33-year-old Tringale, who is seeking his first win on the PGA Tour, eagled the par-five 12th in a bogey-free round.  Read more

How to Watch the 3M Open 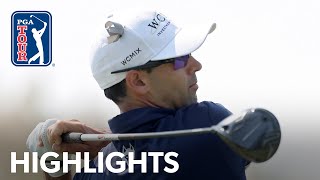