Jamieson maintains one shot lead: Will he become the second ever wire-to-wire Rolex Series winner? Record-holder Lowry is just one shot back.

Scott Jamieson will take a one-shot lead into the final round of the 2022 Abu Dhabi HSBC Championship but he will have a host of Ryder Cup stars breathing down his neck at Yas Links.

The long-time leader was leapfrogged by Shane Lowry and Thomas Pieters as the playing partners matched each other with bogey-free rounds of 67 but Jamieson birdied the 15th and last to sign for a 68 and edge back in front at 11 under at the first Rolex Series event of the season.

ABU DHABI, 22nd January, 2022 (WAM) -- Scott Jamieson will aim to become just the second wire-to-wire Rolex Series winner as he clung on to his lead at the Abu Dhabi HSBC Championship, carding a superb birdie on the final hole to move one clear of Shane Lowry and Thomas Pieters.

The Scot has now lead each round thus far by a single shot, and will play alongside 2019 champion Lowry and Pieters in the final round, targeting a life-changing maiden Rolex Series win after a four under 78 left him on an 11 under par total.

Indeed, Lowry's own win in Abu Dhabi in 2019 is the only wire-to-wire victory in Rolex Series history and the Irishman will be hoping to draw on those happy memories as he searches for a first title since his famous Open Championship triumph in 2019.  Read more

Who is Scott Jamieson and how is he fending off so many top players in Abu Dhabi?

ABU DHABI — He’s not going away. Not yet anyway. For three days now, well-known names have clustered around the top of the leader board in the Abu Dhabi HSBC Championship. And that is the case with 18 holes to play. Shane Lowry, Viktor Hovland, Ian Poulter and Adam Scott are all within five shots of first place after 54 holes on the testing 7,425-yard Yas Links layout. But they have all been looking up at the same man at the end of each round: Scott Jamieson.  Read more 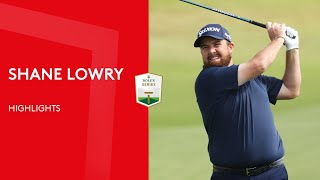