With a 3-foot putt on No. 17, American Ally Ewing won the inaugural Bank of Hope LPGA Match-Play Hosted by Shadow Creek, taking a 2-and-1 victory over Germany’s Sophia Popov for her second career LPGA Tour title. Ewing and Popov played through blazing hot conditions, with temperatures all week in the upper 90s, wowing the small gallery of invited family and guests with a display of world-class golf on a similarly world-class layout at Shadow Creek.  Read more

Match play can set the stage for a marathon, and Ally Ewing lived it this week in Las Vegas. At the end of five days, Ewing had played seven matches and 122 holes, but she walked away from the Bank of Hope LPGA Match Play with the second title of her LPGA career.

Ewing had to take on two major champions in the final two rounds to claim her trophy. She advanced past Ariya Jutanugarn, the 2018 U.S. Women’s Open champion, in the semifinals at Shadow Creek Golf Club on Sunday morning and then met Sophia Popov, the reigning AIG Women’s British Open champion...  Read more

Ewing had played 105 holes, Popov 98, before they added the final 17 from their championship match at Shadow Creek. Not surprisingly, perhaps, the duo combined to win just four holes in their fatigued state. (Maybe Shanshan Feng was the smart one when she conceded her consolation match for third place against Ariya Jutanugarn, citing fatigue and the desire to rest ahead of this week’s US Women’s Open.)

They did come alive, briefly, on the par-3 13th, splitting birdies for the first time since the fourth hole. Ewing was 62 feet out on the 14th...  Read more

Ally Ewing claimed the inaugural Bank of Hope LPGA Match-Play title on Sunday (May 30) by defeating German Sophia Popov 2 and 1 in Las Vegas for her second career LPGA triumph.

Amid blazing conditions, the former Mississippi State star dropped a 3-foot putt on the 17th hole at Shadow Creek to clinch the victory as Ewing completed a 6-1-0 weekend in the final event before next week's US Women's Open in San Francisco... Read more 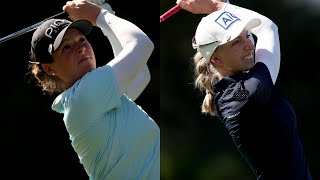