England’s Alice Hewson catapulted herself up the leaderboard at the Aramco Saudi Ladies International presented by Public Investment Fund with a second round 64.

The 2020 Investec South African Women’s Open champion began the day at Royal Greens Golf & Country Club on one-under-par, and kicked off her round with a birdie on the first, despite dropping a shot on the third, Hewson rolled in birdies on six and nine to make the turn in 34 (-2).  Read more

Alice Hewson produced a sparkling second round to take a one-shot lead into the weekend at the Ladies European Tour's Aramco Saudi Ladies International.

The 24-year-old birdied seven of her final 10 holes to close an eight-under 64 at Royal Greens Golf and Country Club, taking her to nine under and a shot clear of Finland's Sanna Nuutinen.  Read more

After carding six birdies on the back nine en route to a second-round 64, England’s Alice Hewson holds the Aramco Saudi Ladies International 36-hole lead at 9 under...

Finland's Sanna Nuutinen is one shot back of the lead after following up her opening 71 with a 65 on Friday. Sweden's Caroline Hedwall and Linnea Strom sit tied for third at 7 under with former world No. 1 Lydia Ko, who held the 18-hole lead. Despite falling out of the lead, Ko actually felt better about her round today than in Round 1, but still sees room for improvement.  Read more 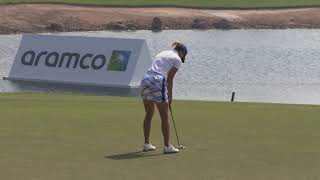