World number seven Lydia Ko produced a scorching round of 63 to claim a four-shot lead on day three of the Aramco Saudi Ladies International presented by Public Investment Fund.

The New Zealander put on a show at Royal Greens Golf & Country Club to equal the course record and move to 16-under-par for the tournament.

Ko dropped a shot on the third hole but that lit a fire for the two-time Major winner, who then made three consecutive birdies on holes four through six.

The 24-year-old continued that trend with three birdies in a row around the turn, before rolling in three more on 13, 14 and 15 with her final birdie coming on the 17th to seal a sensational round.  Read more

From Yahoo!Sports, by Golf Channel Digital:

Lydia Ko tied a course record and will enter the final round of the Aramco Saudi Ladies International with a four-shot lead.

Ko had 10 birdies and one bogey in shooting 63 at Royal Greens Golf & Country Club. She stands at 16 under par, four shots clear of Thailand’s Atthaya Thitikul, who shot 65 in Round 3.  Read more

A course-record equaling 63 from Lydia Ko has the New Zealander in firm control heading into the final day of the $1million Aramco Saudi Ladies International presented by PIF.

The former World No.1 carded five birdies on both the front and back nine at Royal Greens Golf & Country Club to lead by four with one round to play.

Sitting at -16, the 24-year-old will look to hold off a final day push from Thailand’s Atthaya Thitikul, whose scintillating 65 propelled her into lone second.  Read more

Best from Australia is Whitney Hillier, securely in the top ten with 7-under par, T6. 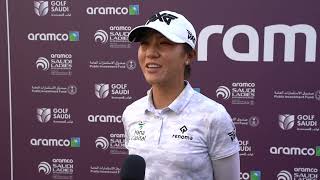