McKINNEY, Texas — Jordan Spieth thought the course for his hometown Byron Nelson would play more difficult after yielding more birdies in its debut than any other tournament on the PGA TOUR last season.

The three-time major winner says he couldn't have been more wrong, and is frankly surprised over how little he thinks was done the first two days to make TPC Craig Ranch a stiffer test.

Ryan Palmer, one of the Dallas-area players in the shadow of Spieth and Masters champion Scottie Scheffler, shot a 10-under 62 on Friday and was tied at 15 under with Sebastián Muñoz and 40-year-old TOUR rookie David Skinns. Read more

PGA TOUR Radio:  Free to all, play by play coverage 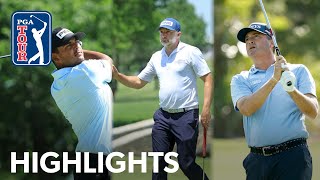