AT&T Byron Nelson, Day One: Sebastian Munoz "makes history" with a 12-under, 60 round to lead

Day One: Sebastian Munoz "makes history" with a 12-under par, 60 round; leads by four

McKINNEY, Texas — Sebastian Munoz was standing in the middle of the fairway on the 18th hole thinking about his shot at a 59 in the first round of the Byron Nelson. After missing the green, he became the first player in PGA TOUR history with two rounds of 60 in the same season.

Munoz made a nice flop shot from the right of the green, then holed the 12-foot birdie putt to wrap up his 12-under round that included an impressive surge after his only bogey.  Read more

Never before has a golfer shot two rounds of 60 or better in the same season on the PGA TOUR. That was until Sebastian Muñoz finished round one of the 2022 AT&T Byron Nelson with a 60, good for -12 on the day.  His previous 60 came at The RSM Classic last November at the Sea Island Resort in Saint Simons Island, GA.

His previous 60 came at The RSM Classic last November at the Sea Island Resort in Saint Simons Island, GA.

Only Justin Thomas, Jon Rahm, and Matt Jones have posted a single round of 60 or better.  Read more

From Fox Sports, by AFP:

Colombia’s Sebastian Munoz fired a stunning 12-under par 60 on Thursday to seize a four-stroke clubhouse lead at the PGA Tour’s Byron Nelson tournament in suburban Dallas.

The 29-year-old from Bogota, whose only PGA title came at the 2019 Sanderson Farms Championship, went 10-under in his last 10 holes to dominate the early starters at TPC Craig Ranch and set a course record.  Read more

PGA TOUR Radio:  Free to all, play by play coverage 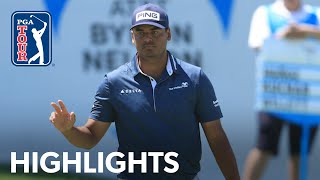