Four of Australia's top golfers are flying to Tokyo to compete among the world's best. They are Marc Leishman, Cam Smith, Minjee Lee and Hannah Green. The men's rounds will be played from this Thursday, 29th July through Sunday 1st August;  women's rounds are scheduled for Wednesday 4th August through Saturday 7th August.

Minjee Lee will be flying in from Europe after her stand out win at the Evian Championship.  This is her second time competing in World Olympics. In Rio, 2016, she finished 7th.  For the other three Aussies this will be their first time to compete as an Olympian.

Hannah Green "has already produced four top-10 finishes on the LPGA Tour this season including a runner-up spot in the Women’s World Championships in April, and became just the third Australian woman to win a major when she took out the Women’s PGA Championship in 2019."   - From Golf Australia

Marc Leishman and Cameron Smith will represent Australia in the men’s competition at Kasumigaseki Country Club next week in a field including five of the world’s top six golfers - only No.2 Dustin Johnson will not be there.

“If I was to win a gold medal I think it would rank above any other win I’ve had,” Leishman said. “Anything other than the British Open or the Masters, I think it’s going to be right there."  Read more 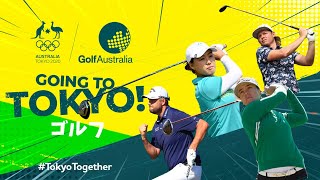