At the end of Day Two of the Australian Ladies Classic 27 year old Holly Clyburn from England remains at the top of the leaderboard, still two strokes ahead on 8-under-par 69. Three bogeys meant she had to fight maintain her lead. She did this, hitting two birdies at the end of the round which made six for her second day.

“This golf course will throw some surprises at you, so you’ve got to stay patient. I finished on a high with two birdies on the last two holes, so I’ll keep doing what I’m doing,” she said.

Immediately following her are Céline Boutier of France and Olivia Cowan from Germany on 6-under 68. Boutier, who shot an eagle and six birdies, expressed particular appreciation of the course, saying that "the more I play it, the more I can see myself playing well.”

However she also noted that the course "can be very tricky if you miss it on the wrong side, you have to be very smart with your approach shots. You can get in trouble very fast.”

Three shots from the lead is Valdis Thora Jonsdottir from Iceland. The tropical Coffs Harbour climate may have affected her play as she said, “The air felt kind of heavy, so it was hard to estimate which club to use and I could tell that I was hitting it a bit shorter, but overall the conditions were good.”

Hannah Green is tied at 5th with Denmark's Nanna Koerstz Madsen. They ended their second day on 4-under 70. Green has a head-cold and is hoping it will be gone by the weekend.

29 year old Rebecca Artis, originally from Coonabarrabran in NSW, is just one stroke back on 7th in a tie with Ines Lescudier from France and Spain's Marta Sanz Barrio. Artis has won LET tournaments twice, in Sweden in 2013 and Scotland in 2015. She too expressed appreciation of the venue.

“Bonville is a pretty spectacular golf course and I think a few of the international players were lucky enough to see a koala walking across the ninth fairway the other day.” 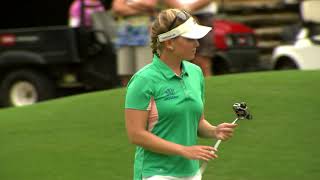