From PGA Australia, by Martin Blake:

Rising star Louis Dobbelaar delighted his hometown fans with a brilliant afternoon round to seize the lead at the Fortinet Australian PGA Championship today.

Dobbelaar, 20, scooted around Royal Queensland in a course record 65 despite the fluky afternoon breeze.

At seven under the Brookwater Golf and Country Club product leads the men’s tournament by a shot from two more Queenslanders, Aaron Pike, whose course record lasted barely a couple of hours, and Jed Morgan, who made the most of his familiarity with the course.  Read more

From PGA Australia, by Tony Webeck:

The Royal Queensland regulars dominated the men’s event while Su Oh showed her class in the WPGA Championship. All the reaction from day one.

Aaron Pike grabbed the early lead in the Fortinet Australian PGA Championship with a course record six-under 65 only to be overtaken late by reigning Australian Amateur champion and fellow RQ regular Louis Dobbelaar.

Su Oh’s morning round of five-under 66 was a mark that stood all day in the Fortinet Australian WPGA Championship with Grace Kim (69) her nearest challenger. Karis Davidson and Julienne Soo are four strokes off the lead after rounds of one-under 70.

Here is all the reaction from an enthralling day’s play at Royal Queensland Golf Club in Brisbane.  Read at this link

@AusPGA   - Shot of the day so far! This is how @louisdobbelaar got his round going on the 2nd

From Golf Australia, by Jimmy Emanuel:  Best Photos of the day 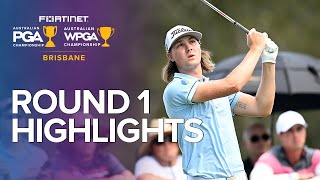