Minjee Lee win's her first major, ...after starting the day seven shots back!

Minjee Lee started the day seven shots back at the Amundi Evian Championship and ended it with a record-tying victory, joining idol Karrie Webb and Patty Sheehan with the largest come-from-behind triumphs in LPGA major championship history.

Lee, 25, becomes the ninth consecutive first-time major winner on the LPGA and the 14th in the last 15 majors. Long considered one of the best LPGA players without a major, Lee finally shed that distinction with her sixth LPGA title. 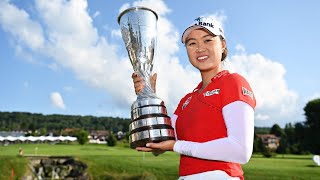