BMW PGA Championship 2021, Day 3: Laporta leads, Scott two back, Lowry "Wants to be on that team!"

Francesco Laporta leads; Adam Scott is two back; Shane Lowry "Wants to be on that team!"

Francesco Laporta set himself up for the biggest round of his career as he carded a 69 to take a one shot lead into the final day of the 2021 BMW PGA Championship.

The Italian finished his round in darkness on a deserted 18th on day two but all eyes were on him on Moving Day at Wentworth Golf Club...

Laporta's three under par effort moved him to 14 under and one shot clear of home favourite Laurie Canter.  Read more

[Shane Lowry] "If I’m named on that team at half seven Sunday evening I’ll be the happiest man in Ireland going home...

“I want to go out and win the tournament but obviously I want to be on that team as well. I feel like I had a great chance to make the team in 2016 and threw that away.

“Whereas the last few months I fought as hard as I could."   Read more

If Bernd Wiesberger finishes inside the top 50 at the BMW PGA, he will move into the fourth spot on the European Tour points list, kicking Rory McIlroy out. McIlroy will then fall into the World points list, removing Lowry from his automatic qualifying spot.

To stay put, Lowry will need a top-eight finish or better.  Read more

How volatile has the qualification process for the European Ryder Cup side become? When Shane Lowry dropped a shot at the par-4 15th hole in the third round of the BMW PGA Championship at Wentworth on Saturday, the former Open champion was suddenly not one of the top-nine automatic qualifiers. He was out and Lee Westwood was in.

Hang on though. When Lowry made birdie from eight feet on the par-5 18th, he moved to 11 under par and into a share of fifth place alongside Bernd Wiesberger and American Sean Crocker. And back into the “projected” Ryder Cup team by a margin of 3.2 points over Westwood.

Hang on though (3). When Kiradech Aphibarnrat made birdie...   Read more of the thin, swaying projection line Lowry is on

From the European Tour, Day 3 Digest:

The battle for the final automatic Ryder Cup place is going right down to the wire. Shane Lowry was in the team on Thursday morning but in the past three days he has been in and out and in and out and on Saturday night, he was out. The Irishman was a mere 2.34 points behind Lee Westwood due to one holed putt on the 18th hole. There are a host of scenarios that could still play out.  Read more

The Preview, by Brendan James 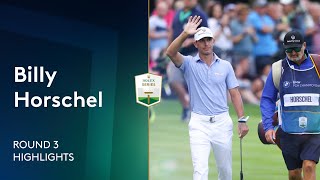