Launched in 1972, the Portland Classic is entering its 50th year. In recent times it has found itself at the nexus of several main fault lines of the 21st Century. These have impacted both the tournament itself and individual players.

In 2017 Stacy Lewis, from Texas, pledged on arrival at Portland that whatever winning payments she received would go to Hurricane Harvey relief efforts. She went on to win the tournament and donated her entire winning share to hurricane relief.

In 2018 Marina Alex won. Australia's Minjee Lee was 4th on the leaderboard. The tournament itself was a peaceful, competitive event. Yet earlier that month riots had erupted in the city of Portland. Police used 'a range of crowd-control munitions' to open fire on protestors and people were hospitalised.

In 2019 Aussie Hannah Green won the tournament. Back in Aus the Bush Fire Danger Period had been declared, two months earlier than usual. By November that fire danger had become 'catastrophic' and by mid January 18.626 million hectares (46.03 million acres) had been burnt or was still burning across Australia.

In September 2020 forest fires in Oregon caused the air to become hazardous to breathe and locals were advised to stay indoors. The Portland Classic went ahead but Thursday's first round was cancelled and the event was reduced to 54 holes. Canadian Brooke Henderson, who had won at Portland in 2015 and 2016, withdrew from the tournament citing air quality and proximity of the fires. "I felt it was unsafe", she said at the time.

In 2021 the Tour has changed venues, heading for the first time to the Oregon Golf Club. The reason for the move is the large number of homeless people who were subsisting around the perimeter of the carpark of the Columbia Edgewater Country Club (the tournament venue since 2013). Piles of rubbish had accumulated and the area was deemed a health and safety risk. The Covid pandemic has exacerbated problems associated with homelessness, hampering clean-up efforts while numbers of those affected continue to increase.

Golf Digest, on the impact of the Oregon fires 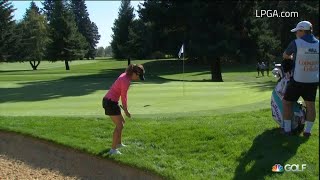