From The West Australian, by Theo Katsaros:

Cameron Smith has overcome world No.1 Jon Rahm in a final-round duel at the Tournament of Champions in Hawaii to win the opening US PGA Tour event of the year in record fashion.

Smith closed out his week with an eight-under 65 to finish a PGA Tour record 34-under and one shot clear of playing partner Rahm. Read more

Cameron Smith outdueled world No. 1 Jon Rahm on Sunday at Kapalua to win the Sentry Tournament of Champions in record-breaking fashion. Here’s everything you need to know:

How it happened: Smith and Rahm entered Sunday knotted up at an eye-popping 26 under, but Rahm, a day removed from tying the Plantation Course record of 61, was much slower to get going in the final round than Smith.  Read more

From Sportsnet.ca, by AP:

KAPALUA, Hawaii — No one ever finished a PGA Tour event more shots under par than Cameron Smith, and he needed every one of them to outlast Jon Rahm and win the Sentry Tournament of Champions.

In the best scoring conditions Kapalua has seen in the 24 times it has hosted the winners-only start to the new year, Smith was relentless all the day down to the 3-foot birdie putt he made on the 18th hole for an 8-under 65 and a one-shot victory Sunday.

Smith finished at 34-under 258, a tournament record by three shots. Ernie Els won at 31 under in 2003, and that was the PGA Tour record for shots under par.  Read more 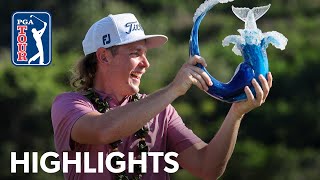