ActewAGL Canberra Classic at Royal Canberra Golf Club - Round One

Light rain and kangaroos on the course did not deter the determined golfers at the first round of the 2018 Canberra Classic. Nor did rising temperatures as the day went on.  One of those who began her round with raindrops falling was former world number one and winner of the 2013 Womens Australian Open, Jiyai Shin of South Korea.  Eight birdies brought her to 7-under-par 65, a lead of two shots. Her skill was evident from her first hole, with an eight feet birdie putt on the par-4 10th.

Oates Vic Open champ Minjee Lee is tied for second with Norwegian Karoline Lund, who is on her first LET Tour, and Germany's Leticia Ras-Anderica on five-under-par 67.

Dame Laura Davies is one of those tied for 5th on 4-under-par.

Shin's comments after her round:  “I have great memories at this golf course and I think that Canberra has been very nice to me.  I want to stay here!  It changed a lot since I last came here five years ago.  It’s quite a narrow course and a few holes are quite tight, but it makes you more focused and I like the challenge.” 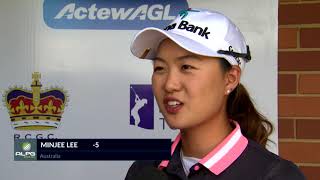