The Cape Town Open is a tournament on the Sunshine Tour, South Africa. From 2012 to 2016 the event was hosted annually in November at the Royal Cape Golf Club. Now it has moved to February 2018 and is being held at King David Mowbray Golf Club.

The 2018 Cape Town Open runs from 22nd - 25th February. The tournament is normally hosted by the Royal Cape Town Golf Club (vid above). This year it is being staged at the King David Mowbray Golf Club in an effort to conserve the city's water. The King David Mowbray, ten kilometres away, uses only effluent water on their course.  Short of a miracle, Cape Town is due to run out of water completely in the months ahead. That date was set for early April. Due to water conservation efforts by many groups "Day Zero" has been moved back to the end of June this year.

"The continuous drought and water shortage in the Western Cape is presenting a serious challenge to us all," said the Chief Operations Officer of the Sunshine Tour, Grant Wilson.  "With this in mind, we have made a decision to move the event to King David Mowbray for this year."

Other water conservation measures taken by the Tour include bringing in bottled water, using disposable cutlery in catering areas and encouraging golfers to use showers sparingly. The Tour will use the tournament to raise awareness around "Day Zero" by encouraging players to wear blue during Friday’s second round.

The Sunshine Ladies Tour, which is co-sanctioned by the Ladies European Tour, have also recently changed the venue for an event.  The 2018 South African Women's Open was to be hosted by the Atlantic Beach Country Club. The prolonged drought has caused serious damage to the course and on 9th February the Sunshine Ladies Tour announced the move to Westlake Golf Club in Muizenberg. The 2018 South African Women's Open will be held at Westlake from March 8th - 10th. 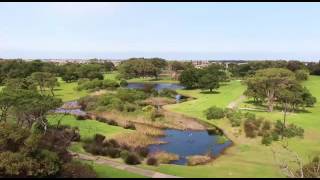