Collin Morikawa has been awarded Honorary Life Membership of the European Tour in recognition of his debut Open Championship victory at Royal St Georges in July.

The American, who goes into this week’s season-ending DP World Tour Championship as leader of the European Tour’s Race to Dubai, lifted the Claret Jug at the first attempt with a two shot victory over his Ryder Cup teammate Jordan Spieth at Sandwich.

It was the second time he had captured one of golf’s four Major Championship in his first appearance, having also claimed a debut win in the 2020 US PGA Championship at TPC Harding Park in San Francisco.

Morikawa, who also won the WGC-Workday Championship at The Concession in February, will this week hope to round off a fine individual season by becoming the first American winner of the European Tour’s Race to Dubai.  Read more 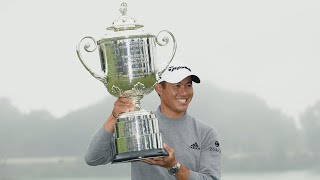