Collin Morikawa tributes his win to his caddie, JJ Jakovac, as well as to his family

Collin Morikawa's caddie is JJ Jakovac. On the Sunday of the final round of the 149th Open Championship, Jakovac turned 39 years old.  What a birthday gift :)    Shortly after having won The Open, Morikawa paid tribute to his family and to his caddie for this momentous success.

Jakovac in turn, "likes to tell one and all that his boss, Collin Morikawa, is an old soul, a man wise beyond his 24 years who is mature and grounded as the day is long and immune to fearing any obstacle at hand".  - Steve DiMeglio

In the video above you can check out "some of the best conversations between 5-time PGA TOUR winner Collin Morikawa and his caddie J.J. Jakovac through The Open Championship 2021. Listen in as they thoroughly discuss strategy and club selection prior to golf shots during tournament play".   - From PGA TOUR.

From Golf Australia:  GALLERY of the final round 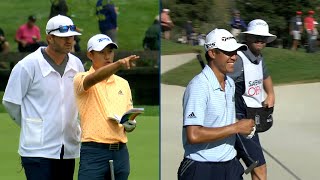