From LPGA Tour, by Steve Eubanks:

ORLANDO, FLORIDA | In all the hoopla and drama of a final round that saw four lead changes and a handful of notable names within striking distance for much of the afternoon, the pitch shot that Hilton Grand Vacations Tournament of Champions winner Danielle Kang hit on the par-5 15th might have gone unnoticed.

Danielle Kang isn't wasting any time making sure she doesn't go through another winless LPGA season, taking out the opening event of 2022.

On a difficult championship test at Lake Nona Golf and Country Club, Kang ran off five birdies in a seven-hole stretch in the middle of her final round to set up a three-shot victory at the season-opening Hilton Grand Vacations Tournament of Champions.

A four-under 68 was the low score on Sunday.  Read more

From Golfweek, by Todd Kelly:

Sunday featured a pair of aces in the LPGA season opener.

Nelly Korda, ranked No. 1 in the world and playing with Annika Sorenstam, the first-ever World No. 1 when the Rolex Rankings debuted in 2006, led by a shot heading into the final round of the Hilton Grand Vacations Tournament of Champions.

But in yet another day of drizzly conditions, Korda slid backwards down the leaderboard as she carded a couple of bogeys to go with a bunch of pars before finally managing a birdie on the 15th hole.

In her place stepped Danielle Kang and Gaby Lopez, who made their moves at Lake Nona Golf and Country Club.  Read more

Danielle Kang carded a four-under 68 to win the Tournament of Champions in Orlando by three strokes over Canada's Brooke Henderson...

Henderson posted 70, while Mexico's Gaby Lopez shot even-par 72 to finish third on 12 under, as France's Celine Boutier (71) and world number one Nelly Korda (75) tied for fourth on 10-under.  Read more 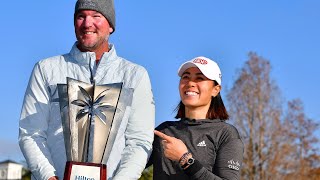