Joachim B. Hansen and Francesco Laporta will share the lead heading into the final round of the 2021 AVIV Dubai Championship after matching rounds of 67 on day three at Jumeirah Golf Estates...

England's Tommy Fleetwood and Australian Min Woo Lee were then at 16 under.  Read more

Francesco Laporta and Joachim B Hansen take a share of the lead into the final round of the AVIV Dubai Championship, with Tommy Fleetwood still in contention after a late birdie barrage.

Laporta birdied the final hole to match Hansen's third-round 67 on the Fire Course at Jumeriah Golf Estates, lifting the pair to 19 under and a shot ahead of defending champion Antoine Rozner.  Read more

Joachim B. Hansen and Francesco Laporta, players outside the top 150 in the world and with one win between them on the European Tour, share the lead heading into the final round of the Dubai Championship.

Hansen got up and down for par from a greenside bunker on No. 18 to shoot a 5-under 67 in the third round on Saturday and move to 19 under par for the tournament in the penultimate event of the 2021 season.  Read more

There was a tie at the top, putters were not in fashion, 63 was the magic number and Dean was trying the trick shots in round three of the 2021 AVIV Dubai Championship.

From the middle of the fairway, from around the green, from the sand - they were going in from all over the place. [Photos and vids at the link, including the eagle on the 18th by Adrian Meronk who was "this close to an albatross".]  Read more 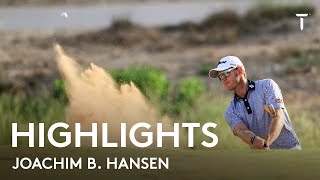