There’s just something about the closing stretch at Evian Resort Golf Club that agrees with Minjee Lee.

With three rounds complete in the Amundi Evian Championship, she is a combined 9-under par on the finishing holes from Nos. 15-18, including a birdie at each on Saturday. The five-time LPGA Tour winner is -11 overall and in a tie for fourth.  Read more

One day after Jeongeun Lee6 matched the lowest round in major championship history with a 10-under 61, she was back making magic happen with a wedge that spun back into the hole for eagle on the par-4 11th. The Saturday highlight bumped Lee6’s lead to five at the Amundi Evian Championship, the same margin she’d finish the day with after a 3-under 68.

Lee6, who celebrated that 61 with a Coke, is 18 under for the tournament.  Read more

From The Irish Times:

Jeongeun Lee6... who took control of the tournament with a scintillating 61 on Friday, carded four birdies and an eagle in her third round as she extended her three-shot overnight advantage.

American teenager Yealimi Noh birdied the final three holes to move into second place with a four-under-par 67 while New Zealand’s Lydia Ko was third on 12 under after a 68.

Minjee Lee holed eight birdies, including five on the back nine, to move into a three-way tie for fourth...   Read more

How to watch the Evian Championship 2021 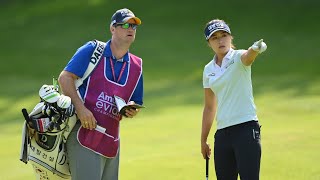