Garrick Higgo won the Palmetto Championship at Congaree for his first PGA TOUR victory Sunday when leader Chesson Hadley lost a two-shot lead with bogeys on his final three holes.

In his role as International captain in the Junior Presidents Cup of 2017, the former Masters winner had a youngster by the name of Garrick Higgo in his squad, a fellow South African, who stood out from his teammates away from the golf course more so than on it.

From Golfweek by Steve DiMeglio:

Inspired by a morning phone call from Gary Player, the 22-year-old South African sensation, a winner three times on the European Tour including this year’s Gran Canaria Lopesan Open in April and the Canary Islands Championship in May, stormed back from six shots, closed with a 3-under-par 68 and took advantage of Chesson Hadley’s late collapse to win.  Read more

Some golfers wait years and years to just have a chance to contend for their first PGA Tour win. Others do so in their first start. Garrick Higgo took the 2021 Palmetto Championship at Congaree on Sunday at 11 under by a stroke over six players who tied for second. It's his first start at a PGA Tour event that's not a major championship...  Read more

From The State, by Bob Spear:

Garrick Higgo received a commissioner’s exemption to compete in the Palmetto Championship at Congaree. He repaid the gift on Sunday in the best possible way — a victory.

A 22-year-old professional from South Africa, Higgo is no stranger to success. But winning in only his second start on the PGA Tour? That’s heady stuff.  Read more 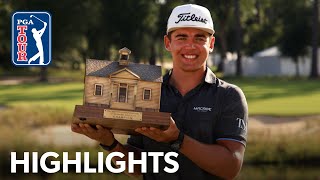