The 21-year-old Higgo shot a 7-under 63 for the second consecutive day to hold off a charge by Maximilian Kieffer, who finished second after an 8-under 62 that included seven birdies and an eagle. Kieffer was coming off a loss in the fifth playoff hole at the Austrian Open.

Higgo had five birdies and an eagle at the Meloneras Golf Course in the Canary Islands, ending the tournament at 25 under. His other European Tour win came last season at the Portugal Open.  Read more

From the Irish Examiner:

The 21-year-old left-hander took a two-shot lead into the final round at Meloneras Golf and carded a flawless closing 63 to finish 25 under par.

Germany’s Max Kieffer, who lost out in a five-hole play-off in the Austrian Open seven days ago, finished three shots adrift following a final round of 62, which included an eagle and seven birdies.  Read more 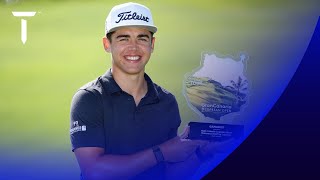