Golf at the Olympic Games, Tokyo, Day 3: Schauffele leads by 1 over Matsuyama

Xander Schauffele leads by one shot over Hideki Matsuyama

Five players had a share of the lead at some point in the third round. Schauffele, Japanese star Hideki Matsuyama and Carlos Ortiz of Mexico were still tied playing the 18th hole at Kasumigaseki Country Club.

Schauffele, who spent much of his round in the bunkers and dense rough, managed to end the day with a one-shot lead, in the same spot he started.  Read more

The third round of action at the 2020 Tokyo Olympics proved the most dramatic yet as a number of challengers pushed 36-hole leader, Xander Schauffele on moving day. However, the American warded off surges from some of golf's biggest stars to retain his lead at the 54-hole mark over a crowded leaderboard as he heads to the final round at 14-under.  Read more

Canadians Mackenzie Hughes and Corey Conners sit in an 11-way tie at 17th place, seven shots back of the lead following the third round of the Olympic golf tournament on Saturday in Tokyo.

American Xander Schauffele is the current leader heading into Sunday's medal round sitting at 14-under. He shot 3-under 68 on the day.

Japan's Hideki Matsuyama, the Masters champion, holds the second spot at 13-under after scoring 4-under 67 on Saturday.  Read more 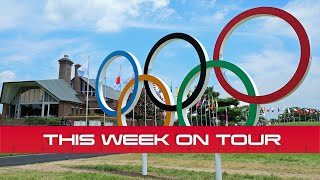