Golf at the Olympic Games, Tokyo, Day One

Sepp Straka holds a slender lead after day one of the Olympic Men’s Golf Competition, five years after he was inspired to become an Olympian by watching the action in Rio on TV.

The Austrian shot a bogey-free round of 63 to get to eight under par and open up a one shot lead over Thailand’s Jazz Janewattananond at Kasumigaseki Country Club as he made his Olympic debut at Tokyo 2020, after watching from afar as golf returned to the Olympics following a gap of over 100 years in Brazil.  Read more

Straka picked a good day to be dialed in with his irons in soft and still conditions. He made four birdies in his last six holes for an 8-under 63 to tie an Olympic record — not all that historical considering golf returned only in 2016 — for a one-shot lead over Jazz Janewattananond of Thailand.  Read more

From Reuters, by Toshiki Hashimoto:

Austrian surprise package Sepp Straka upstaged a slew of golf's biggest names at the Olympics on Thursday to take a one-shot lead in a sweltering opening round as home hero Hideki Matsuyama battled to stay in touch after a recent brush with COVID-19.

Teeing off in the first group with his twin brother Sam carrying his bag, 28-year-old Straka shot an Olympic record-equalling eight-under 63 at Kasumigaseki Country Club to be one stroke clear of Thailand's Jazz Janewattananond.  Read more

World No. 161 Straka took advantage of early benign conditions to set the pace with a bogey-free eight-under 63 at Kasumigaseki Country Club.

For those journos who are in Tokyo, trying to cover events at the Olympic Games, - this year more than any other we have to wonder, what is it like?  In the video above, senior writer Sean Zak from Golf.com takes you along to find out. 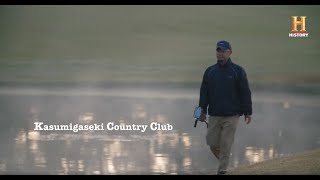