Now that [Xander Schauffele is] here, in the country where his mother was raised and enjoying an Olympic experience his father could only dream about, he is trying to treat this like any other week.

His play Friday indicated otherwise. Already with two eagles on his card, Schauffele surged into the 36-hole lead at Kasumigaseki Country Club by finishing with three straight birdies to tie the Olympic record with an 8-under 63.  Read more

Cam Smith is the best of the two-strong Aussie contingent after the Queenslander signed for a four-under round of 67 on Friday.

Our top ranked men’s player was even par after day one and could have been in a better spot than the share of 20th he currently finds himself in following a double bogey at the par-4 18th.  Read more

Red-hot American Xander Schauffele snatched the halfway lead with a record-equalling round as a cruel late blow left Cameron Smith cursing his luck at the Olympic men's golf tournament.

From Yahoo!Sports, by James Pollard:

Repeated weather delays interrupted the second round, though that didn’t stop Schauffele from finishing with a 63 on the day. As a result of bad weather, 16 golfers — including Japan’s Hideki Matsuyama, currently tied for third — were unable to finish Round 2.

The 16 golfers who have yet to finish the second round will resume play at 6:45 p.m. ET on Friday.  Read more

From the BBC Sport:

Ireland's Rory McIlroy and Shane Lowry moved into Olympic medal contention with two of the best rounds on day two of the men's golf tournament. Lowry shot a superb six-under 65 and McIlroy 66 to reach seven under.

Xander Schauffele leads on 11 under after an eagle on 14 and three final birdies saw him card an eight-under 63.

Great Britain's Paul Casey, whose round was halted after the 17th hole because of dangerous weather in the area, was seven under with one hole left to play.  Read more 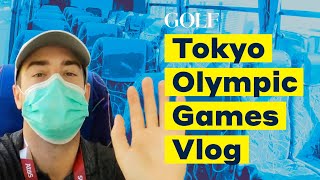