Russell Henley has missed the cut at the Mayakoba Classic after playing a golf ball different from the rest he used - incurring a penalty of eight shots.

American golfer Russell Henley has earned praise after copping a bizarre eight-stroke penalty which took him from the leaderboard to missing the cut at the US PGA Tour event in Mexico.

Countryman Harris English shot a seven-under 64 to take a one-shot halfway lead over Vaughan Taylor on Saturday, but the big talking point was the whopping penalty imposed on Henley.

The three-time tour winner was signing his used balls for fans when he realised one was a slightly different type of Titleist ProV1x than the rest and reported it to rules officials.

Under the "One Ball Rule" used on most professional tours, golfers must use the same brand and make of ball throughout a round.

Eight rules officials on site conferred for about an hour-and-a-half and even consulted the USGA before imposing a two-shot penalty for each of the four holes Henley thought he'd used the ball on.

After an opening 66, Henley's two-under 69 on Saturday turned into a 77 and he missed the cut by two shots.

"It was a small dash, a different way (the ball) was marked that would have been easy to overlook," Tour rules official Brad Fabel said.

"He came to us and said he didn't know how it had gotten in his bag."

There was no question, Henley said, that he'd used the ball.

He gives balls he's put into play to his caddie to mark accordingly, and the Pro V1x in question was marked as such.

The mix-up ends Henley's made cuts streak at eight, including the past four starts of last season and the first four of this season. He took the news well.

"He was great," Fabel said. "I've got a ton of respect for that gentleman." 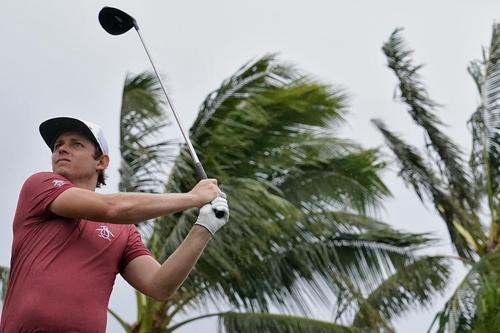