HONOLULU (AP) — Hideki Matsuyama made up a five-shot deficit on the back nine and then won the Sony Open in a playoff with one of the best shots he never saw, a 3-wood into the sun to 3 feet for an eagle to beat Russell Henley on Sunday.

The eighth career PGA Tour victory for Matsuyama tied him with K.J. Choi for most tour victories by an Asian-born player.

“I got on a roll,” said Matsuyama, who shot 31 on the back nine while Henley made eight pars and a bogey. “I'm glad it came out this way.”

Matsuyama hammered a driver on the par-5 18th in regulation to set up a two-putt birdie for a 7-under 63 and got into a playoff when Henley missed a 10-foot birdie putt and closed with 65.

Back to the 18th for the sudden-death playoff...  Read more

From Yahoo!Sports, by Ryan Young:

Thanks to a wild Sunday rally, Hideki Matsuyama has picked up his first win in 2022.

The reigning Masters champion pulled himself out of a five-shot hole to force a playoff before beating Russell Henley to claim the Sony Open on Sunday.

Matsuyama has now won twice already this season and twice in his last three starts following his win at the Zozo Championship in October.  Read more

From Golfweek, by Adam Woodard:

In the second event of the new year, the defending Masters champion earned his eighth PGA Tour win on Sunday at the 2022 Sony Open in Hawaii in dramatic fashion. Matsuyama shot a 7-under 63 in the final round at Waialae Country Club to match 54-hole leader Russell Henley at 23 under and force a playoff, which he won on the first extra hole.  Full article and gallery at this link 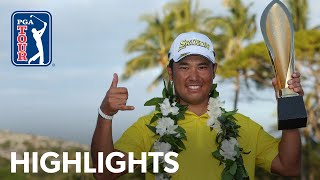