In the 13 previous editions of the Honda LPGA Thailand, no Thai player has ever ended on top of the leaderboard. Major champion and Bangkok native Patty Tavatanakit is looking to change that, as she holds the 54-hole lead at Siam Country Club at -18. The last time she slept on the lead heading into the final day was in her win at the 2021 ANA Inspiration, an experience she’s reflecting on as she remains in contention in Chonburi.   Read more

Hannah Green said there wasn’t a number in her head as she embarked on the third round of the Honda LPGA Thailand. After a 71 on Friday, Green knew catching Patty Tavatanakit’s lead would be hard work. A bogey-free 64 on Saturday was enough to get the two-time LPGA Tour winner and major champion within three strokes of the lead at -15, a surprise even to Green.  Read more

From The Straits Times/ Reuters:

Overnight leader Patty Tavatanakit shot a two-under 70 to take a one-stroke lead after 54 holes on Saturday (May 8) at the Honda LPGA Thailand.

The 21-year-old is seeking her second victory of the season, having won the ANA Inspiration last month in Rancho Mirage, California for her first Major title. She is also looking to become the first Thai woman to win the event.

After two consecutive rounds of eight-under 64, Patty mixed two bogeys and four birdies in an uneven round and admitted to some nerves. Read more

How to Watch LPGA Thailand 2021 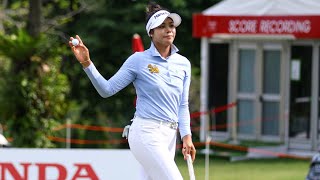