Rain delayed the start for 2 1/2 hours, with 0.9 inches falling at Memorial Park. None of the afternoon starters completed play.

Leishman, Henley and Gooch each finished at 5-under 65, while List had three holes left when play was called for the day.

Leishman closed with a bogey on the par-4 18th.  Read more

Marc Leishman has continued his strong start to the new PGA Tour season to be sharing the lead after his opening round of the Hewlett Packard Enterprise Houston Open in Texas.

Leishman carded a five-under-par 65 to be tied atop the leaderboard with Americans Russell Henley, Talor Gooch and Luke List, who only managed 15 holes before play was suspended due to darkness.  Read more

Four players are tied at the top of the Hewlett Packard Enterprise Houston Open but the first round was suspended due to darkness.

Three of the four on five under – Russell Henley, Talor Gooch and Marc Leishman – completed their rounds, while Luke List was through 15 holes when play was called off.

List had an eagle on the par four 14th to push himself up the leaderboard, while Leishman could have held the outright lead but bogeyed the 18th.  Read more 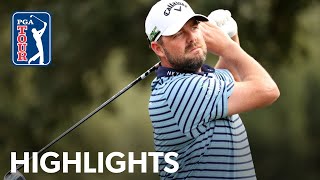