HOUSTON (AP) — A key figure in the U.S. victory at the Ryder Cup, now Scottie Scheffler goes after a trophy of his own in the Hewlett Packard Enterprise Houston Open.

Scheffler pitched in from 55 feet for birdie on the 14th hole, holed a 10-foot birdie on the next hole and avoided mistakes down the closing stretch Saturday at Memorial Park for a 1-under 69 and a one-shot lead going into the final round.

Scheffler, in his third year on the PGA TOUR, has a 54-hole lead for the first time.  Read more

American Scottie Scheffler shot a one-under 69 to be a one-shot leader after three rounds of the Hewlett Packard Enterprise Houston Open.

On a day where low scores were hard to come by, the US Ryder Cup hero matched two bogeys with three birdies - including chipping in from 55 feet on the 14th - to claw three spots up the leaderboard on Saturday.  Read more

Marc Leishman has had a back nine to forget at the Houston Open but still remains in contention for victory after the third round of the PGA Tour event in Texas.

The Australian made three bogeys in his run home on moving day, including one on the 18th, to card a one-over 71.

Yet Leishman was 4-under par and a share of 10th place - just three shots adrift of leader Scottie Scheffler.  Read more 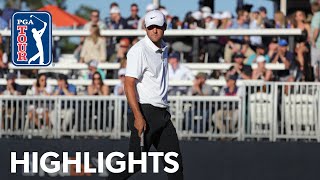