It was a final day unlike any other in Singapore for the HSBC Women’s World Championship. Eleven of the top-12 players heading into Sunday were already LPGA Tour winners, with 60 victories between them and 17 major championship titles. Among them, five shots out of the 54-hole lead, was Hyo Joo Kim...

Kim carded four birdies in the last five holes of her front nine to make the turn at -13, putting her right in contention...

Green, sitting two strokes back of Kim’s lead heading into the 14th hole, holed out to make her second eagle of the week and then birdied No. 16 to take a one-shot lead. But, a disastrous end brought the Australian back down to Earth as she bogeyed her final two holes and played herself out of her third-career win.  Read more

Hyo Joo Kim wore a full-face mask all week at the HSBC Women’s World Championship, not because of COVID concerns but due to a severe sun allergy. Kim’s hat and sunglasses covered the rest of her face, giving her the appearance of a beekeeper heading to work.

The coverings kept secret the emotions the 25-year-old South Korean was feeling as she made up a five-shot deficit coming into the final round at Singapore’s Sentosa Country Club. With a bogey-free 64, Kim rallied for her fourth career LPGA Tour victory, but the first since the 2016 Pure-Silk Bahamas LPGA Classic.  Read more

Kim, who wore a white mask that extended down below her neckline because of a severe sun allergy, closed with a sizzling 64 to finish at 17-under 271. Australia’s Green (69) came in solo second while Patty Tavatanakit, the wire-to-wire winner of the ANA Inspiration, finished with a 65 to move into a share of third with Inbee Park and China’s Xiyu Lin.  Read more 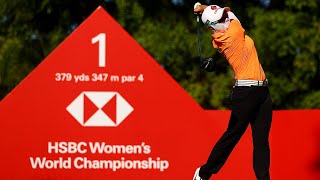