This week the Queensland Open is being held at Pelican Waters Golf Club on the Sunshine Coast. The tournament is a part of the 2020-21 ISPS Handa PGA Tour of Australasia. Defending champion this year is Anthony Quayle.

The first Queensland Open was held in 1925, at the Brisbane Golf Club, and was won by Harry Sinclair from Sydney.

In 2018 the competition was opened up to include women, and Becky Kay became the first female to qualify for the event. Now in 2021, as well as Becky Kay there are five other female competitors:  Steph Kyriacou, Karis Davidson, Sarah Wilson, Grace Kim and Jordan O'Brien. More about the female competitors, from AAP at Golf Australia.

Therese Magdulski, GA’s general manager of events and operations said: “We are really excited to see more women contesting the event this year.

“With a huge priority for Golf Australia being to increase opportunities for women and girls, this is a taster for our plans for a women’s Queensland Open into the future.”  More here 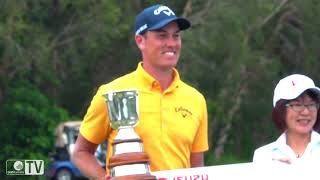