Jiyai Shin of South Korea has won the 2018 ActewAGL Canberra Classic by six stokes ahead of Minjee Lee, with an all round total of 19-under-par 197.  This is the 50th professional golf win for the 29 year old,  her second win at the Royal Canberra and her third in Australia. Her previous win at the Royal Canberra was in 2013 when she was battling NZ's Lydia Ko, then in 2016 she won the RACV Ladies Masters.

In her final round Shin shot a 25 ft eagle at the 15th hole, along with seven birdies and one bogey, completing that round with an 8-under-par 64.

Oates Vic Open Champion Aussie Minjee Lee struggled at times through her final round, with three bogeys in a row, then another on her 18th.

“From the start, I wasn’t hitting it that solid, so I don’t think I hit it that well or putted that well and I had one-over, but it is what it is,” Lee said.  “I was never going to win with those last couple of holes. After Jiyai’s eagle I think it was pretty set, so I just played my game.”

"Some weeks it just feels like I’m hitting it further and further. It must be over 300 yards, like 315, 320, something like that. If it goes straight, I have a lot of short clubs in and that’s nice on this course," Van Dam said after her round.

Along with Van Dam, others who qualified for the Womens Australian Open in Adelaide next week are Olivia Cowan, Jenny Haglund, Amy Boulden, Marianne Skarpnord, Cathryn Bristow, Leticia Ras Anderica and Christine Wolf via the ALPG. 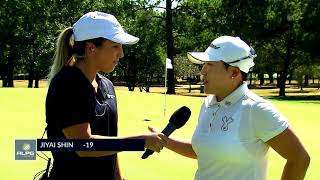