In the final round of the 2021 TOUR Championship, Joaquin Niemann completes his final round in one hour and 53 minutes and shot a two-over 72 in the process.

Check out the best, and funniest, moments from his round.

From ESPN, by Bob Harig:

Joaquin Niemann had nowhere to be on Sunday, but he decided to play the final round of the Tour Championship as if he were in a hurry.

Niemann, playing first and alone because Brooks Koepka withdrew on Saturday with a wrist injury, raced around East Lake Golf Club in one hour and 53 minutes on Sunday. He teed off at 11:40 a.m. and was finished some 30 minutes prior to the leaders teeing off.

He also got a good-natured scare from the PGA Tour, which told him afterward he was being fined and then let him stew for few minutes before finally telling him it was a joke.  Read more

From Yahoo!Sports, by Jack Baer:

Niemann also finished 4-over for the round, cementing last place on the scoreboards but not in our hearts.

Niemann's time beat the Tour Championship record previously held by Kevin Na, who did the same thing in 2016 and finished in one hour and 59 minutes.  Read more, with accompanying videos, here 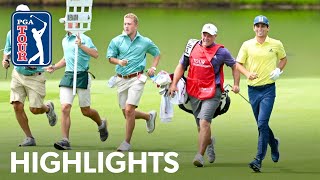