This week LET golfers are travelling from the Swiss Alps to the beautiful Bordeaux region of France, famous for its castles and gardens, vineyards and wine expo. Two Aussies, Stephanie Kyriacou and Whitney Hillier, will be competing at the Golf Du Medoc resort.

The Ladies Open de France is held on the renowned Châteaux course.  A par-71, 7192 yard championship course designed by US golf architect Bill Coore, it was voted Best Golf Course in France four times in recent years by the World Golf Awards.  Designed as a links-style course, the Châteaux features fast greens, wide fairways bordered by flora reminiscent of Scottish coastland (heather, gorse and broom), and is buffeted by coastal winds.

In 2020 the tournament was won by then-19 year old Julia Engström from Sweden, who had won the 2020 Women's NSW Open in March. However she has not been able to compete through this Tour season due to a back injury so will not be not present to defend her title.  Nelly Korda won in 2019 and Caroline Hedwall in 2018.

This tournament was first held in 1987 and is an annual event. Lacoste became the sponsor in 2011.  Australians have won the tournament twice, in 1997 (Karen Lunn) and 2014 (Stacey Keating). 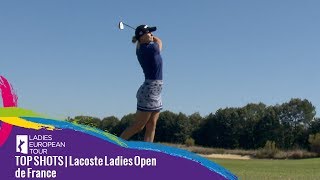