Next month the calendar clock ticks over for both Lee Westwood and Justin Thomas as they each become, officially, a year older. Their birthdays are less than week away from each other's, on the 24th and 29th April respectively, but they were born two decades and continents apart. When Thomas was a newborn, Westwood had already won a significant amateur golf tournament two years earlier and was stepping into his role as a professional golfer.

That they both made it through to the top places in the final round of THE PLAYERS Championship says a lot for both golfers.  This was the tournament where, at the end of the first round there were multiple scores of 80+,  more than 20 triple bogeys or worse, and 35 golf balls taking a dive on the 17th.

Yet Westwood completed his sixth bogey-free round at TPC Sawgrass at 36 holes, and took the lead. Patience, perseverance, stamina and strength are all requirements to make it through to such a leading approach, as well as experience, determination and of course, skill.

And, Westwood has developed an additional quality which is serving him well. He "does not waste time worrying about the things he cannot control. Not anymore."  - That from Daniel Rapaport at Golf Digest, who quotes Westwood as saying:

“Through the 30s, I started to treat it a bit too seriously and worry about what people thought or look at trouble on the golf course. Now I just sort of stand up and hit it, and if it goes well, it goes well. And it generally does.”

Another article on the resilient English golfer is by John Huggan at Golf Australia:  "Who is Lee Westwood".

[From the intro]  Lee Westwood has been a constant in professional golf for more than two decades. And of late, the Englishman has reminded those in America just how good a player he remains.

In Huggan's article, "some of those who know him best, Westwood himself and top names in golf discuss the person and the player."

Among the words and phrases of others are a sense of humour, a normal bloke, strength of character and great humanity. 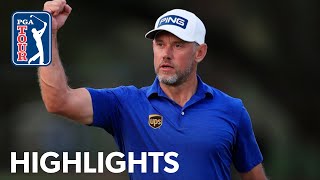