Team Hillier sit at the top of the leaderboard with a one-shot lead at the end of the first day of the Aramco Team Series – Bangkok.

The quartet of Whitney Hillier, Chonlada Chayanun, Krista Bakker and amateur Pattanan Amatanon combined for an excellent first round making the turn in -8 and having an equally good back nine to be 16-under-par for the tournament.

And captain Hillier, whose mother is Thai, was pleased with how her team began their round and the fact they had fun at Thai Country Club.   Read more

From Bunkered, by Lewis Fraser:

Kylie Henry is in contention after the first round of the Aramco Team Series – Bangkok, and hopes the team format can spur her on to a strong finish.

The Scot is currently in a tie for eighth on three-under-par in the individual event, only three shots back from the early lead, held by Patty Tavatanakit.  Read more 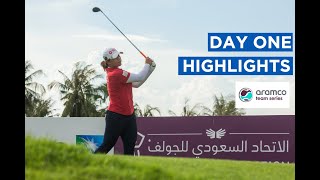