Team Hillier triumphed at the Aramco Team Series – Bangkok as they recorded a final round of 15-under-par to secure a three-stroke victory at Thai Country Club.

After starting the day in front, Whitney Hillier, Chonlada Chayanun, Krista Bakker and amateur Pattanan Amatanon backed up their excellent first with another great round to seal victory on -31 at the Aramco Team Series – Bangkok.

It was a first LET title for Hillier and Chayanun, while it is back-to-back victories in the Team event as Bakker was part of Team Pedersen in Jeddah last November.  Read more 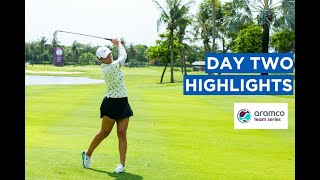