LET releases record-breaking 2022 schedule; will be in Aus in April

“On the back of a strong 2021 season, which featured 23 tournaments, 2022 is going to be a record-breaking year for the LET with the largest total purse and number of events in history,” said LET CEO Alexandra Armas. “We will be launching new events in Asia and South Africa and returning to various territories across Europe and further afield, so it’s looking very exciting for our international membership."
----

The 2022 season will open with the return of the Magical Kenya Ladies Open in February, followed by the Aramco Team Series – Asia. The Joburg Ladies Open will debut in Spring, joining the Investec South African Women’s Open, which will move to Steenberg Golf Club in Cape Town, as part of a fortnight in South Africa.

The LET will then return to Australia [in April] for a two-week swing with the Australian Ladies Classic Bonville and the Women’s New South Wales Open at Coolangatta & Tweed Heads Golf Club.  Read more

Full schedule of tournaments and dates 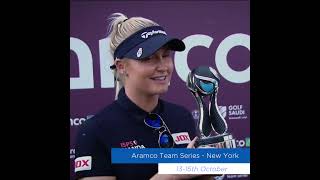