The 25-year-old Ariya won for the 12th time on the LPGA Tour and second this season, and the 26-year-old Moriya took her second title. Ariya won the Honda LPGA Thailand in May 9...  Read more

From Yahoo!Sports, by Beth Ann Nichols:

Ariya and Moryia Jutanguarn fired a second 59 in the best-ball format en route to victory at the Dow Great Lakes Bay Invitational. The Jutanugarn sisters had experienced just about everything together in golf – except winning.

With her sister in the water on the final hole, Ariya drained a 35-foot birdie putt from off the green to put a stamp on a three-stroke victory over defending champions Jasmine Suwannapura and Cydney Clanton. The players known as Mo and May finished at 24 under for the tournament.  Read more

From Golf Digest, by Kent Paisley:

The victory snapped a three-year winless streak for Moriya and placed Ariya alongside Nelly Korda as the two players with multiple wins on the LPGA Tour in 2021. Even having become the first Thai player to win the Honda LPGA Thailand in May, Ariya said that winning alongside her sister and her family in attendance was the most special victory of her career.  Read more 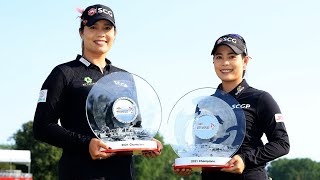