The Great Lakes Bay Invitational is the LPGA's first team event, being formally announced in 2018, and first held in 2019.  The tournament is played with 72 two-woman teams competing in a 72-hole stroke play format, with alternating rounds of foursomes (alternate shot) and four-ball (best ball).

Thai sisters Ariya and Moriya Jutanugarn shot an 11-under 59 in best-ball play Thursday to take a two-stroke lead in the Dow Great Lakes Bay Invitational.

The Jutanugarns had a 14-under 126 total at rainy Midland Country Club after opening with a 67 on Wednesday in alternate-shot play. They will play alternate shot Friday and close with best ball Saturday... 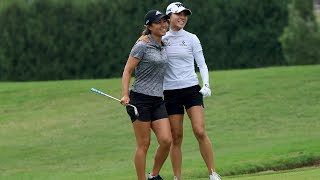