The winningest Canadian player in history returned to her winning ways at the Hugel-Air Premia LA Open. Brooke Henderson ended a victory drought that dated back to June 2019 in show-stopping fashion, toppling No. 1-ranked Jin Young Ko, Jessica Korda and Hannah Green at historic Wilshire Country Club with a closing 67.

The victory gives 23-year-old Henderson her 10th career victory, tying Ariya Jutanugarn, Shanshan Feng and Paula Creamer among active players. With golf courses closed in Henderson’s native Ontario until at least May 20 due to COVID-19 restrictions, the victory at last gave some of Henderson’s biggest supporters reason to smile back home.  Read more

She was one of three players to shoot in the 60s for each round of the HUGEL-Air Premia LA Open and a 5-under par 66 on Saturday at Wilshire Country Club propelled Hannah Green into a share for third.

The performance makes it 12 consecutive under-par rounds for the major champion. She finished at -14 for the week in Hancock Park.

“It has been really nice that everything kind of pieced together this week,” said Green, who has earned three straight top-15 finishes. “Putting has been key for me, but also hitting greens in regulation. I added some distance and hit it a little bit longer. Now that I have shorter shots in, I expect my greens in reg will go up. That was another key for me, making sure I missed in the right areas and hitting lots of greens.”  Read more

Henderson dominated the stage with her latest career blockbuster. She shot four-under-par 67 to finish at a tournament-record 16 under and beat Jessica Korda (72) by one shot. At 23, the Canadian reached a milestone in winning her 10th career LPGA title.  Read more

Leading by two heading to the final hole, Henderson missed badly left on the par-3 18th while Korda landed within five feet of the hole and nailed her birdie putt. But Henderson delivered an excellent chip within four feet, allowing her to salvage par and hold on for the win.

She entered the day four shots behind Korda, who had a 1-over 72.  Read more 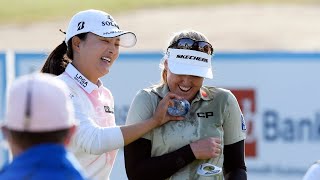