Day Three at Sentosa GC and Xiyu Lin from China has taken the lead, 14-under-par. Australia's Hannah Green is tied 2nd with Inbee Park on 13-under, followed by Gaby Lopez from Mexico on 12-under.

After a birdie on the finishing hole, Xiyu Lin holds the solo 54-hole lead at -14 at the HSBC Women’s World Championship after a third-round 66 ...

Second-round co-leader Inbee Park got off to a hot start with four birdies in her first nine holes, but struggled at the turn. After holding the lead for much of Saturday, Park doubled No. 16 - her second double bogey of the 2021 season – to drop out of the top spot. A birdie on the last hole left her in a tie for second along with major champion Hannah Green at -13 ...

Gaby Lopez tied her season-best round with a 65 to sit in fourth heading into Sunday. Three major champions are tied for fifth at -10 – In Gee Chun, Lydia Ko and So Yeon Ryu. LPGA Tour winners Madelene Sagstrom, Amy Yang and Hyo Joo Kim are -9 overall, five shots out of the lead in a tie for eighth. Hee Young Park, who co-led heading into Saturday, fell into a tie for 21st after a quadruple bogey on No. 16 ...  Read full article here

China's Lin Xiyu tapped in on the 18th hole for her fourth birdie of the back nine and a 5-under 67 to take a one-stroke lead Saturday after three rounds of the LPGA Tour's HSBC Women's World Championship.

Hannah Green shot her second consecutive 66 to move into a share of second place with world No. 2-ranked Inbee Park, who shot 70 with a birdie on the 18th after a double-bogey 7 on the 16th cost her the lead.  Read more

Lin birdied four of her last six holes to close out a five-under 67 at Sentosa Golf Club and get to 14 under, giving her a narrow advantage over Australia's Hannah Green and overnight co-leader Inbee Park.  Read more 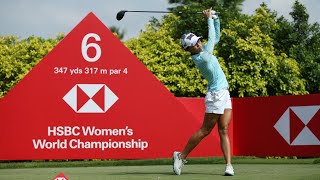