2021 U.S. Women’s Open champion Yuka Saso didn’t show any sign of offseason rust in the first round of the Hilton Grand Vacations Tournament of Champions. The 20-year-old fired a 4-under 68 on Thursday, highlighted by a 60-yard, hole-out eagle on the 14th at Lake Nona Golf and Country Club.

Saso also carded six birdies and four bogeys in her tournament debut, an up-and-down day that has her just one shot back of the early lead. Playing with World Series champions Tom Glavine and Jon Lester, Saso didn’t seem bothered by the event’s unusual format, instead peppering her playing partners with questions, curious about their prior athletic careers.  Read more

One day into the season and LPGA leaderboards are already on fire, picking up from a dynamic end to 2021. World No. 1 Nelly Korda, a winner last year at Lake Nona Golf and Country Club, and sister Jessica Korda, defending champion at the Hilton Grand Vacation Tournament of Champions, are within striking distance of leader Gaby Lopez, who opened with a 5-under 67.

Nelly Korda, who delivered one of the best shots of last season when she nearly jarred a 7-wood for albatross at the KPMG Women’s PGA, needed only 11 holes to record her first eagle of the new year on Thursday. From 222 yards out at Lake Nona’s par-5 11th hole, Korda flushed a hybrid to 4 feet.

The shot highlighted an opening 4-under 68 that has the world No. 1 a shot off Gaby Lopez’s lead at the Hilton Grand Vacations Tournament of Champions. But it arguably wasn’t the most crucial of the day. Read more

Canada's Brooke Henderson is two shots off the lead after the first round of the LPGA Tour's season opener.

Henderson, from Smiths Falls, Ont., shot a 3-under 69 on Thursday in Orlando at the Hilton Grand Vacations Tournament of Champions.

"Moving forward, I feel like this was a great start, and looking forward to the next three days," Henderson said.

Lopez began a new year and her seventh LPGA Tour season with a simple, and potentially prophetic, Instagram post: ``Surprise me, 2022,'' she wrote.

Lopez jumped out to the lead Thursday, piecing together what she considered a near-perfect opening round to the new season. She made six birdies in a 5-under 67 at Lake Nona Golf and Country Club.  Read more 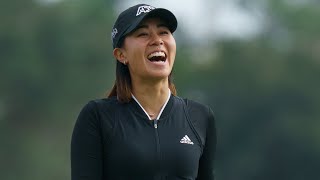