On Friday, Celine Boutier blew them all away.

Few players can boast a better 2021 season than Minjee Lee. The seven-year LPGA Tour veteran has had a banner year, one that’s seen her victorious in a major at the Amundi Evian Championship and notch five other top-five results, most recently at the Walmart NW Arkansas Championship. Lee even represented Australia at the 2020 Tokyo Olympics, finishing in a tie for 29th.  Read more

Celine Boutier enjoyed an outstanding back-nine 30 to open up a four-shot lead at the halfway stage of the CME Group Tour Championship in Florida.

Boutier was level par after eight holes of her second round before making seven birdies over the last 10 holes to return back-to-back 65s and put daylight between herself and the rest of the high-quality field in the lucrative season-finale on the LPGA Tour.  Read more

From Yahoo!Sports, by Doug Ferguson:

NAPLES, Fla. – What looked to be a wide-open race for the richest prize in women’s golf is now in the hands of Celine Boutier, who made seven birdies over the last 10 holes for a 7-under 65 and a four-shot lead Friday in the CME Group Tour Championship.

For so much of the wind-blown second round, a dozen or so players were separated by one shot at Tiburon Golf Club. That included Nelly Korda and Jin Young Ko, four-time winners this year in a battle for LPGA Player of the Year.

Over the final two hours, Boutier left them all in her wake in the chase for the $1.5 million prize.  Read more

How to Watch the Tour Championship 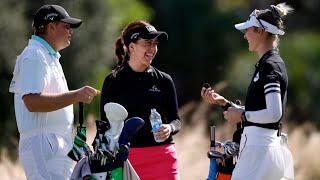