In 2019, she became the first player to win the $1 million prize at the U.S. Women’s Open. And after a first-round 64 at the CME Group Tour Championship, Jeongeun Lee6 is well on her way to a $1.5 million check, the largest in women’s golf. The 25-year-old from Korea tops the CME Group Tour Championship leaderboard at -8 after 18 holes, hitting hit every fairway and every green in regulation on Thursday and notching eight birdies.  Read more

From SMH, by James Polson:

Just days after the biggest windfall of her career, Australian golfer Hannah Green is eyeing another prize after a hot start to the final LPGA Tour event of the year.

Green is tied for sixth at six-under-par after 18 holes at the CME Group Tour Championship in Naples, Florida, two shots off the lead alongside compatriot Minjee Lee.

South Korea’s Jeongeun Lee is the outright leader at eight-under, with countrywoman Sei Young Kim, Celine Boutier of France and American duo Mina Harigae and Jennifer Kupcho all tied for a second a shot back.  Read more

Ireland's Leona Maguire is three shots off leader Jeongeun Lee6 after the opening round of the CME Group Tour Championship in Florida.

Maguire carded a five-under-par 67 for tied 14th, but in touch with South Korean Lee who shot 64. Maguire rolled in four birdies in as many holes and, although she bogeyed the ninth, the 26-year-old ended her round with an eagle on the 17th.  Read more

Leona Maguire has done everything bar win this year, but she had to work hard to keep pace with the leaders by opening with a five-under 67 in the $5 million, season-ending CME Group Tour Championship in Florida on Thursday.

Teeing it up at Tiburón Golf Club in the season finale for the second year running, the Co Cavan star opened with four straight birdies on a low-scoring day before recovering from a bogey at the ninth with an eagle-three at the 17th.  Read more

How to Watch the Tour Championship 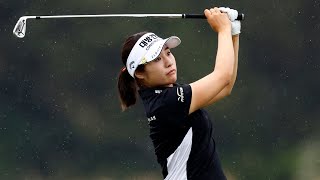