Matti Schmid produced the lowest round of the week so far to sit alongside English duo Dale Whitnell and Sam Horsfield at the halfway stage of the 2022 Soudal Open.

Morning starter Schmid made eight birdies before dropping his only shot of the day at the ninth - his closing hole - in a superb 64 which moved him to eight under par.

It was a tale of two nines for Horsfield - who, like Whitnell began the day in a three-way tie at the top of the leaderboard - as the 25-year-old made three bogeys and a single birdie on the front side before coming home in 31 to sign for a 69.

Whitnell, meanwhile, completed his round with a birdie at the ninth to join Schmid and Horsfield at the summit, as he also shot a second-round 69.  Read more 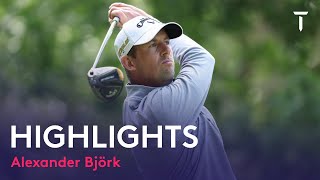