Hashimoto shot a fourth successive round of four-under-par 68 to win the third edition of the Women’s Amateur Asia-Pacific (WAAP) championship by one stroke; The Japanese player ended the week on 16 under.

Mizuki Hashimoto secured an invite to two of next year’s majors after claiming a one-shot victory at the Women’s Amateur Asia-Pacific Championship.

Hashimoto carded a fourth consecutive round of 68 to end the week on 16 under at Abu Dhabi Golf Club, making her the second successive Japanese winner of the event after Yuka Yasuda lifted the trophy when it was last played in 2019.  Read more

The Women’s Amateur Asia-Pacific Championship has been developed by The R&A and Asia-Pacific Golf Confederation to unearth emerging talent and provide a pathway for Asia’s elite female amateurs to the international stage.  Read more 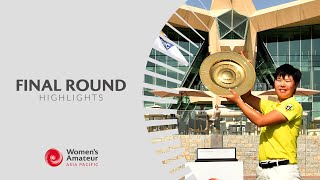